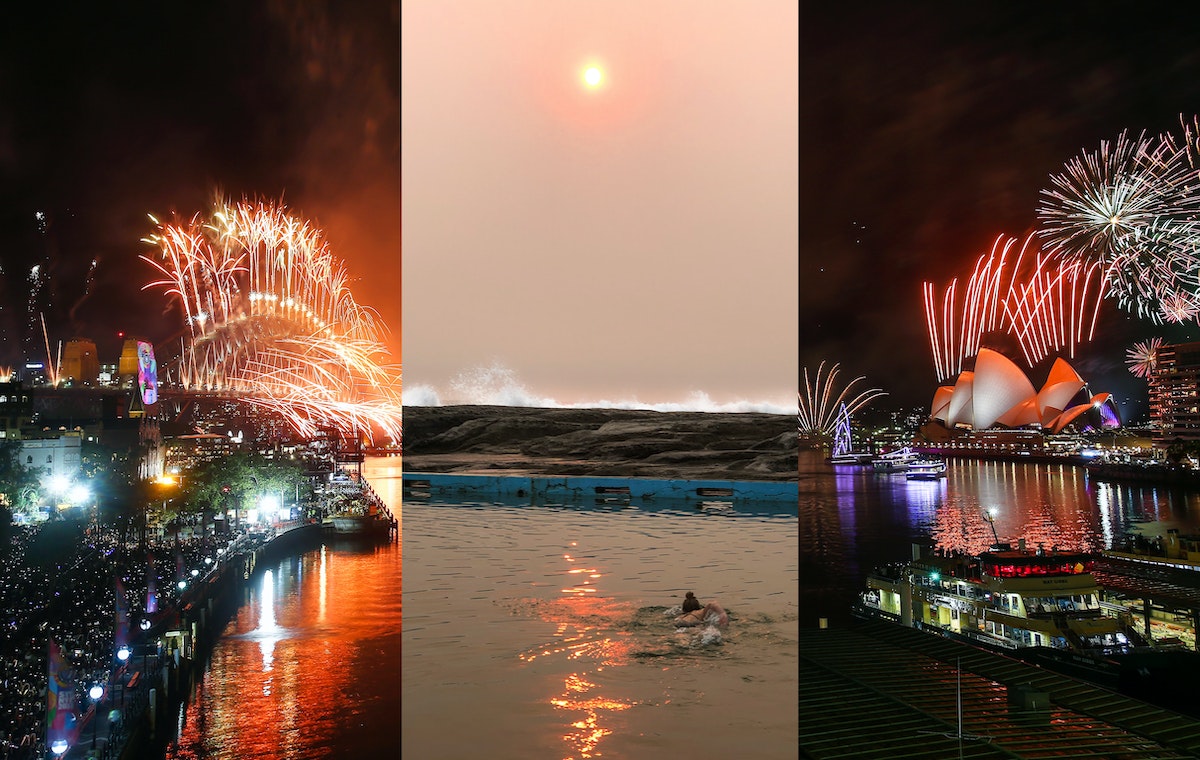 While the state burns...

Amidst the worst fires in Australia's 231 years of European settlement, the City of Sydney controversially went ahead with its New Year’s Eve fireworks event.

Realistically, despite a total fire ban across the city, and most of the state, there was never any chance of the event causing additional fires over the harbour or central city. So, the event, which the Sydney Morning Herald classified as “too big to fail”, went ahead. Yet many were left wondering, amid an unfolding crisis, just how appropriate it all was? For many, the decision just didn’t feel right.

By going ahead as planned, Sydney’s New Year’s Eve fireworks did offer opportunities for people to donate to fire relief. Reduced to bystanders, Sydney people felt that little bit less helpless. Maybe at best, the fireworks offered a kind of mass diversionary therapy—a gorgeous sideshow for a million people who couldn’t do anything anyway. Such events do have secondary benefits. One example is its capacity for gilding for an international audience, the already glittering mythology that is “Brand Sydney”. Yet none of these secondary benefits could address the primary concerns coming to the fore through the ongoing fire crisis.

Twenty-four hours ahead of the event, The City of Sydney finally decided that the fireworks would go ahead. On the afternoon of the event, Shane Fitzsimmons, Commissioner of the Rural Fire Service, held a news conference. As fires raged over the horizon to the south, he stated clearly; "The New Year's Eve celebration in Sydney has nothing to do with the fire activity down the South Coast”. That may have been true, but for many, feelings of disjuncture were growing as the fires continued to expand on ever-widening fronts.

Events like the current fire crisis—as Prime Minister Scott Morrison found out—throw out wild flaming vortices, sucking in all sorts of tangentially related facts and issues. They may not be precisely accurate or directly related, but drawing from broader perspectives, they all contribute to a bigger picture and new understandings.

The crisis has propelled climate change back to the very top of the public concern. In being absent in Hawaii when Sydney was shrouded in impenetrable smoke, the Prime Minister seems to have missed a significant turning-point in public sentiment. It was a point that his Deputy PM, Nationals Michael McCormack, experienced, comprehended and readily acknowledge. Asked if he thought community sentiment had shifted during the ongoing fire crisis, he replied, "Yeah I do, absolutely; I do agree entirely."

In terms of the immediate fires, there was little the Prime Minister could practically do. He didn’t directly cause them, nor can he directly stop them—even if broader ideological arguments would have it otherwise. But the longer the crisis lasted, the angrier and more frustrated people were becoming.

Unfairly or not, Morrison became the issue. Before he knew it, he found himself caught in the updraft of one of the flaming whirlwinds thrown off by the fires. He is yet to re-establish a sure footing. Somehow, images of Opposition Leader, Anthony Albanese, turning sausages at a barbeque rest-spot for firefighters—Bunnings like—was all people needed to see.

Meanwhile, the debate about whether the New Year’s Eve fireworks should go ahead was inflaming other similarly tangential, long-simmering concerns. Why do we even persist with this increasingly anachronistic form of bread-and-circuses entertainment anyway? Are we not wantonly pouring more smoke into an already acrid Sydney basin? Can we really keep dumping entertainment-generated carbon wastes into an already warming atmosphere? And do carbon offsets actually absolve such behaviour?

As New Year’s Eve dawned orange, many could feel the portents for the worst day so far of this progressive crisis. The run-up had felt ominous. For several months, a never-ending, ever-evolving series of fire crises had metastasised along the length of the New South Wales coast, spreading into the nearby ranges. This was but its latest rearing.

As the day progressed, from within the concrete island of Sydney, it was clear the state beyond was ablaze. The basin of Sydney was again full of pungent smoke. The sun, when visible, was a diminished orange disk, capable only of casting the weakest of shadows. After such an extended period of heightened alert, it seemed unremarkable that temperatures away from the immediate coast were again heading for the mid-40s.

On this last day of the decade, nature inflamed was positioned to explode exponentially across multiple, as yet, unburnt domains. Angry fires, dicing for their dates with destiny, danced dangerously close to South Coast communities. At the very same time in Sydney, a million people were gathering around a moderately milder harbour for the New Year’s Eve festivities. The evening progressed. And as the fireworks went up at 9 and 12, towns to the south were burning down. And thousands of people; some with livestock and pets, were fleeing to any available football fields, lake shorelines and beaches.

In the cafes and on the beaches of Sydney, during the prior week, people were exchanging opinions. Should the City of Sydney proceed with the fireworks or not? The Sydney Morning Herald reported that nearly 300,000 people had signed an online petition to abandon them. However, that petition referred to all New Year's Eve fireworks across the nation. Still, it pointed to a strong and growing sentiment.

The competing opinions in play gave the citizens of this normally fortunate city a taste for the contradictions of a first world-like conundrum. But this hypothetical was set for a real situation. Even if the Rural Fire Commissioner had stated that the fireworks and the actual fires were unconnected, there was an uncomfortable relationship.

The City of Sydney seemed obliged to meet multiple pre-commitments for it to continue with its carnival of synchronised pyrotechnics, even as it coincided with a determinedly-unsynchronised, out-of-control conflagration. In arguing for a go-ahead, spokespeople for a range of benefiting organisations repeated the same secondary reasons. Collectively, it sounded like the same song sheet. All seemed to suggest that some international view of the city would be compromised if the fireworks didn’t go ahead as planned.

It seems an Indian Summer ago, (just September 2019), that The Economist Intelligence Unit raised Sydney to its no.3 rankings for the world most livable cities. Ironic as it seems now, the respected magazine pointed to an “improvement in... [Sydney’s] culture and environment score, reflecting an increased focus on combating and mitigating the impacts of climate change.” Since that recent accolade, Sydney has endured months of poor air quality. There were days when smoke was so thick, that ferries needed fog horns to grope their way around the harbour; just as in a mid-winter fog.

And still the Federal Government, through the Prime Minister, maintains an increasingly unconvincing position on climate change. Speaking after New Year, but before the next onslaught, the Prime Minister blithely repeated, "Our emissions reductions policies will both protect our environment and seek to reduce the risk and hazard we see today.”

The Prime Minister seems satisfied to think that the dots weren't connecting. Concerns from the immediate fire crisis, combined with anxieties around longer-term climate change was reflecting in unease towards the fireworks. People were joining the dots themselves.

The final-call to proceed with the fireworks came down to long-serving independent mayor, Clover Moore. Before the decision, the Fire Commissioner exempted the City to the total fire ban then in force. While quoting a now-familiar list of secondary benefits, Councillor Moore's decision seemed ironic. The Economist stated that one of the primary reasons for its strong ranking of Sydney flowed from the City’s own carbon minimisation aspirations as expressed in their document—Sustainable Sydney 2030 Strategy.

Does the exemption the City appears to grant itself for the fireworks event, risk reducing this document to a Utopian-like series of KPIs of its own making? Is its mere existence sufficient to ticks the boxes it created? With the coming together of the fireworks and the fires, how were the secondary spruikers reconciling the dissonance of the two contradictory images emanating from Sydney that night?

If only linked by spectacle and geography, the BBC placed the two stories—the fires and the fireworks—side by side, at the top of their news website. And it was the fire story that led. The fireworks ran second. In the face of such discordant visions, prime ministers, politicians and publicists can only continue for so long with their increasingly unconvincing and rationalised positions.

As the crisis continues, its scope, scale and longevity are reshaping the understandings and opinions of the nation. It's the palpable reshaping of reality.

Further reading: Why NYE fireworks are a little dissatisfying 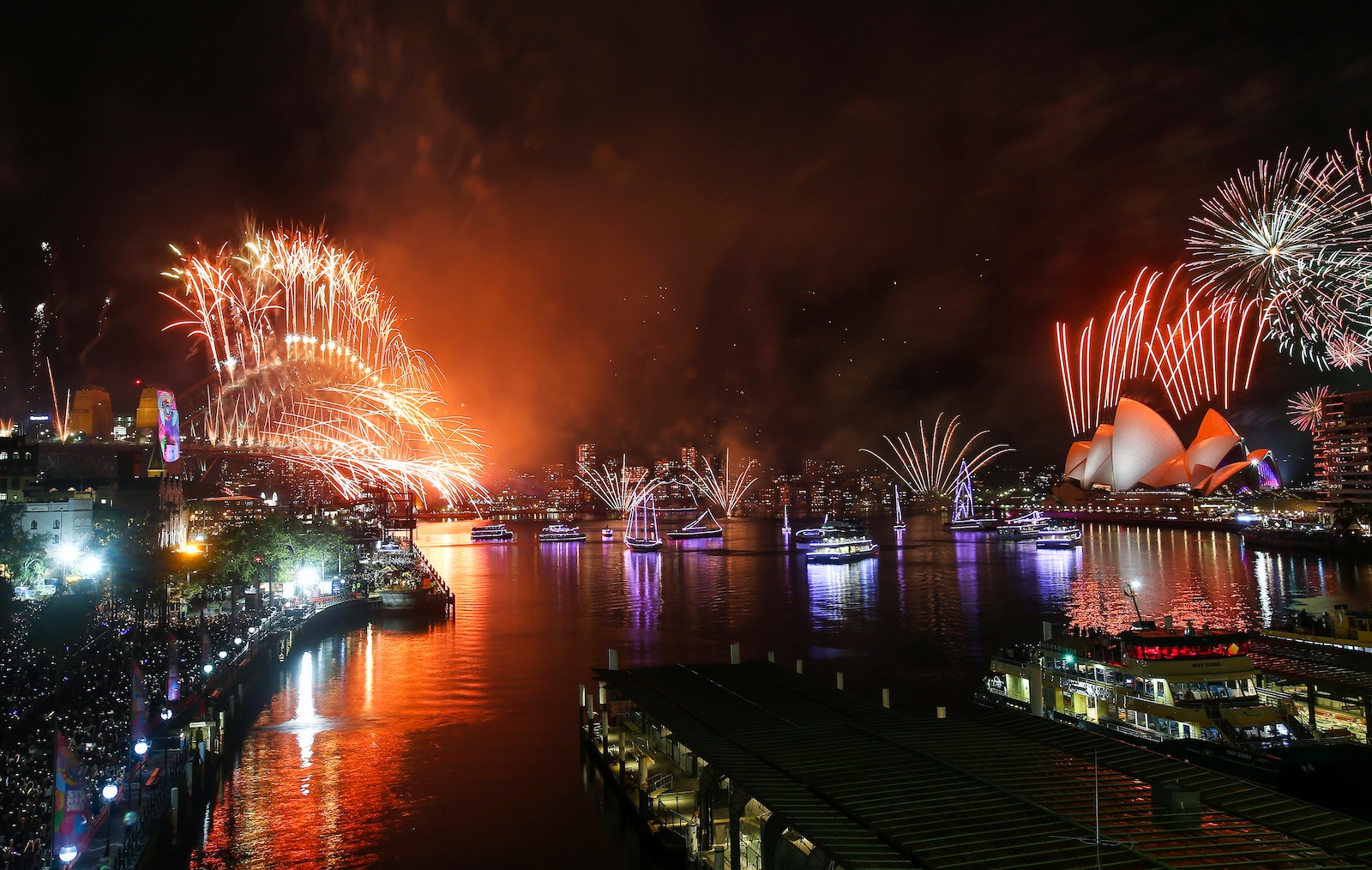 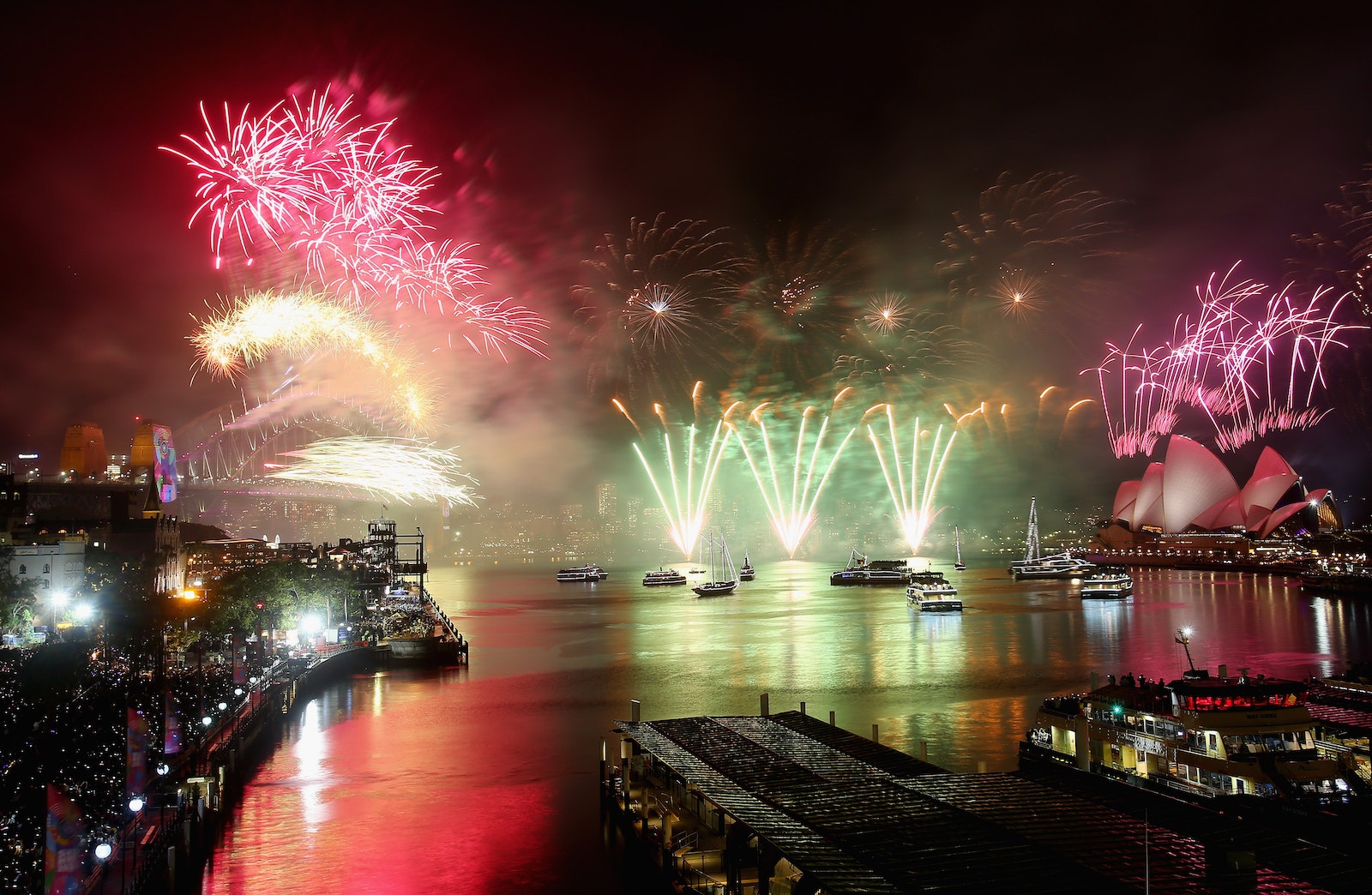 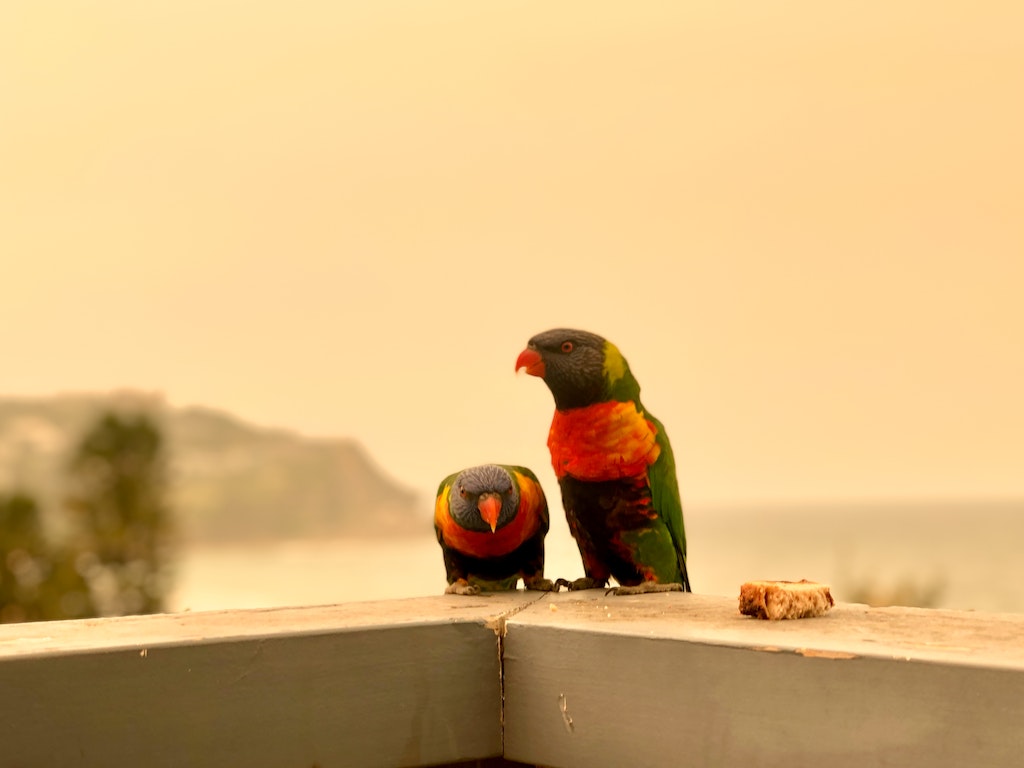