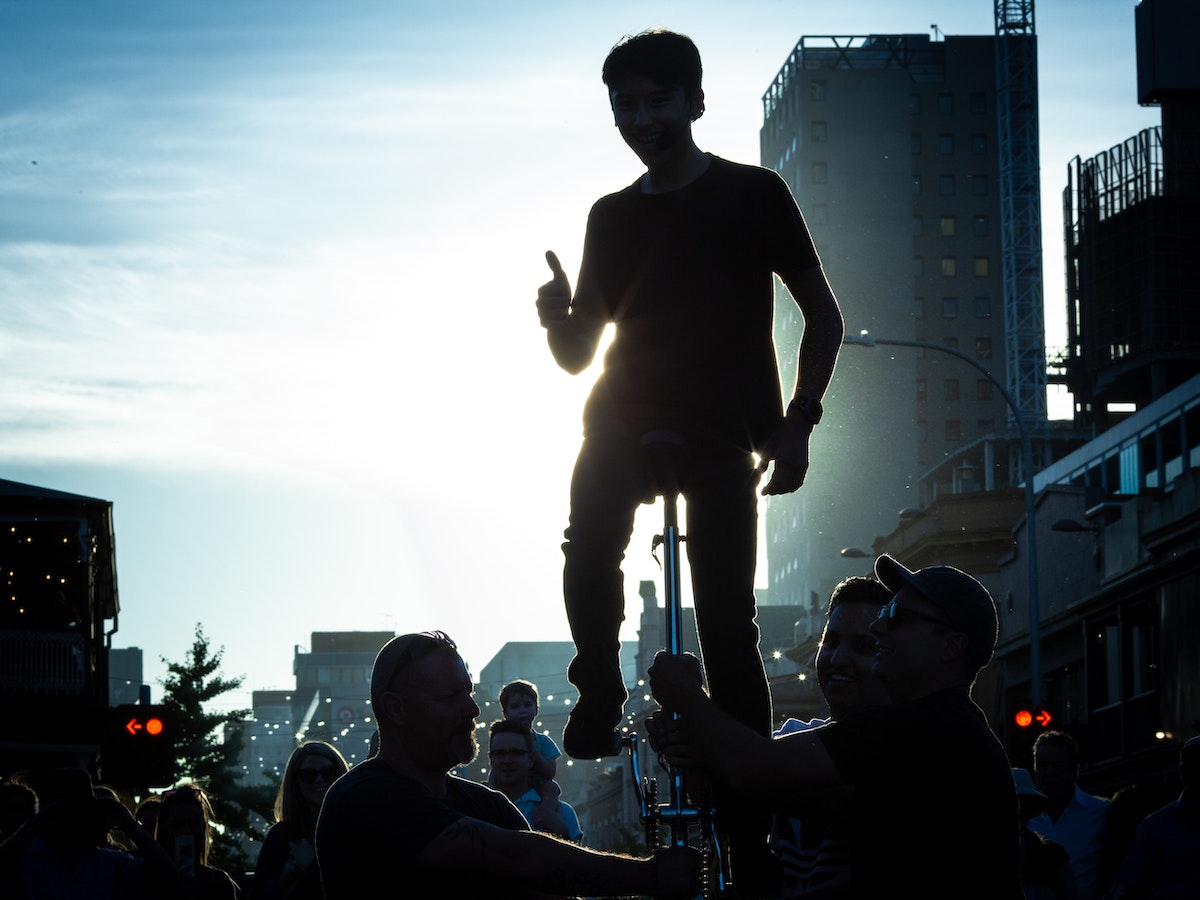 Are there any true, authentic and observable origin points for what is emerging into the broader culture?

The refining processes at work at the two major Fringe events of Edinburgh and Adelaide, opens portals to the firmament of developing shows, emerging performers and evolving ideas. From the thousands of shows on offer, a process of reviews, awards and word-of-mouth, suggests what goes on to tour–nationally and internationally. These core events operate as a parallel trade show, drawing in agents, festival organisers and theatrical bookers from all over the world.

These are the shows and performers that emerge from the process are the leading indicators for what and how we experience, comprehend and participate in our broader culture. Through Fringe it is possible to see the future coming.

Few places or events on earth act as such efficient incubators as Fringe events, for such a broad range of creative outputs—of any brow. And at Fringe, the process is on-show for all to see and partake—performers, producers and public alike. What people experience on stages large and small around the world, doesn't just arrive fully formed. That's the same in Sydney and Melbourne; London and New York; Newcastle, UK and Newcastle, NSW—and even in Newcastle, Texas. What manifests as tasty, consumable theatrical events, have survived multiple gestations, teams of midwives (maybe midparents) and dozens of wet nurses of all genders.

For emerging forms of creative expression, there are many paths into the broader cultural consciousness. The core Fringe events provide a focused, concentrated and fully observable opportunity, from which multiple contenders emerge. Over a month of Fringe, multiple invisible hands get to work; separating out the exceptional from the thousands of hopefuls. Numerous awards, multiple reviews, and the word-of-mouth of thousands, combine to determine what will endure and likely extend beyond the Festival. What travels beyond, is facilitated through the hovering flock of international bookers, agents, producers, and festival directors; ever poised to swoop down through the rising thermals, to snare significant shows of varying genres and traditions. To this extent, Fringe is best understood as a trade show for performers and associated creative professionals. And the biggest show on earth is in Edinburgh, which for the month in August, must be the most creative patch on the planet.

In the popular mind, “Fringe” can conjure up images of an inner-city, alternative-arts festival. Or, maybe an extended gig of multiple stand-up comedians. It can be these things; but it’s also, so much more—and comics rarely represent more than 25% of the offering.

Over nearly 75 years, the original Edinburgh Fringe has grown into the largest mass-participation cultural event on the planet, dwarfing the prestigious Edinburgh Festival it once shadowed. In terms of ticket sales, it is exceeded only by the World Cup and the Olympics.

Significantly Edinburgh Fringe is an open-access event. Any person, group or troupe can participate, as long as they can find the ways, and have the means to do so. Their purposes don't even need to be professional or theatrical. In understanding the rich pickings that emerge from such a hands-off approach, the Scots have cannily brought forth one huge, organic, multi-purpose, ever-evolving and gorgeously chaotic event. It's these conditions that give rise to the rare leading indicators for what is likely to emerge into the broader cultural consciousness.=

Core nexus of the Fringe process

The International Fringe Festival Association now lists 250 similar events around the world. And, the number two event in terms of size and significance, is the one hosted by Adelaide in South Australia. Significantly, Adelaide Fringe has inherited similar organising principals to those employed by Edinburgh.

As in Edinburgh, the event takes over the city. In Adelaide, activity is centred in and around the refreshingly shaded parklands encasing the city centre—which offers sometime insulation from the hot winds that arise out of the nearby deserts. Over 60 years, Adelaide Fringe has grown to serve as a complementary, counter-seasonal role to Edinburgh. Many acts, and some of the infrastructure, readily transfer between the other. Many significant shows utilise the Fringe processes of one, to escalate themselves to the other; providing them with additional opportunities.

Around Australasia, there are multiple other Fringes, comedy festivals and arts events, all leading to and from Adelaide— a bit like an Australasian tennis circuit leading into the Australian Open. Combined, the two Fringe events constitute the core nexus of the international Fringe process. Adelaide's role in this process, gives an extraordinary uplift to Australasian acts and performers, both nationally and internationally. They participate in Edinburgh at a rate of 800% more, per capita, than those from English-speaking North American (i.e., US and Canada). In 2017 at Edinburgh, Hannah Gadsby, from nearly 4,000 shows, topped the list in Edinburgh for the most five-star reviews.

It's no exaggeration to state that what emerges from the Adelaide Fringe process represents Australia's most significant ongoing input to the broader evolving culture; with nary a subsidy in sight...

One Fringe nexus point feeds into the other. Together they present examples of what is forming in the broader cultural firmament. Tracking developments at one end feeds into the other. Relaying reports from one end to the other provides, in advance, briefings for the context and creative intent of contenders as they progress through this incredibly rare and effective creative incubator.