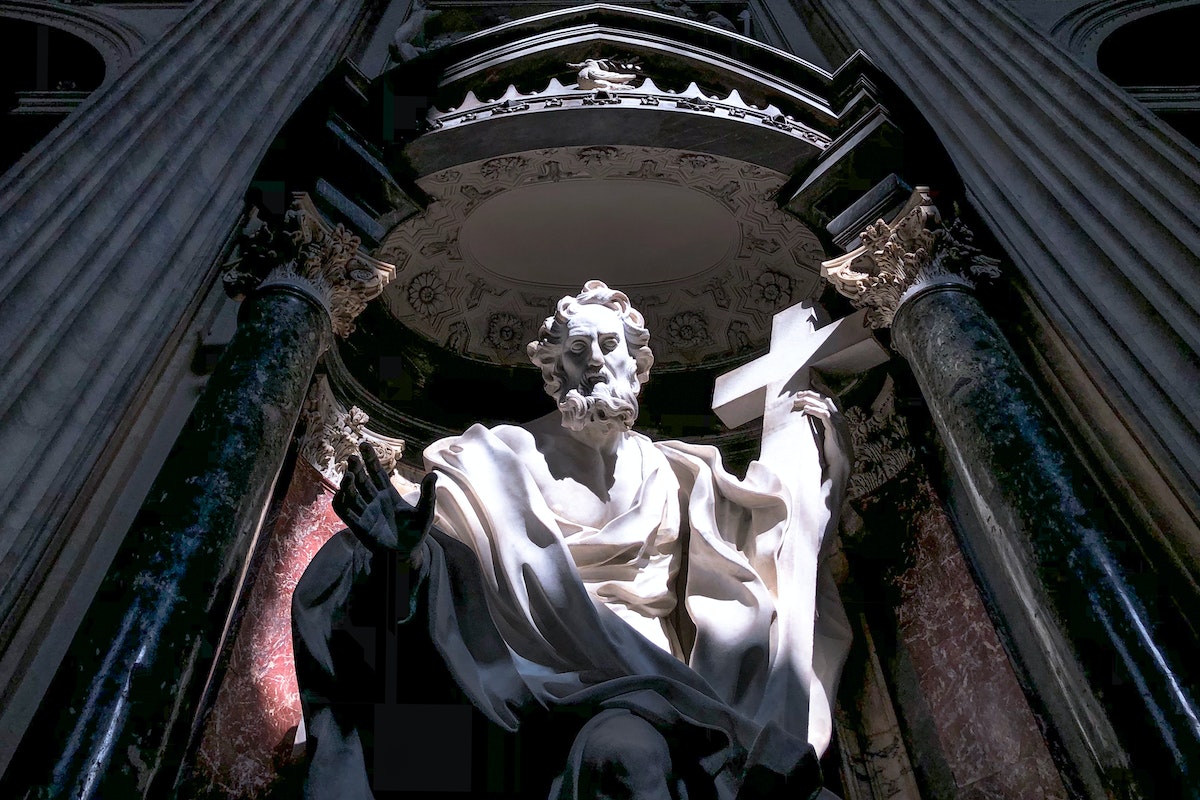 A stage to the world

San Giovanni in Laterano (the Cathedral of St John Lateran) may appear to be the second major church of Rome. Yet, its stage-set façade suggests claims of even more considerable significance.

The Cathedral is the oldest of the five major churches of Rome—a collection well known to Dan Brown devotees. Built on a site that was once owned by Constantine's sister, It's been restored many times. It's located just inside the old Roman Gates on a hill that slopes away to the Colosseum. 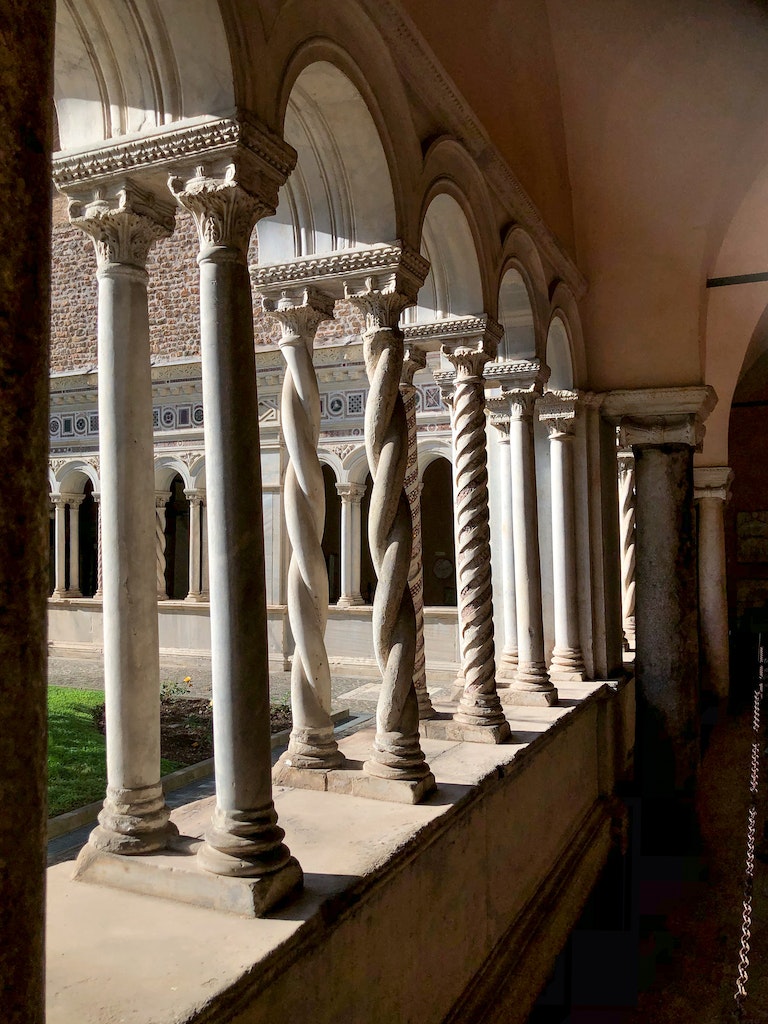 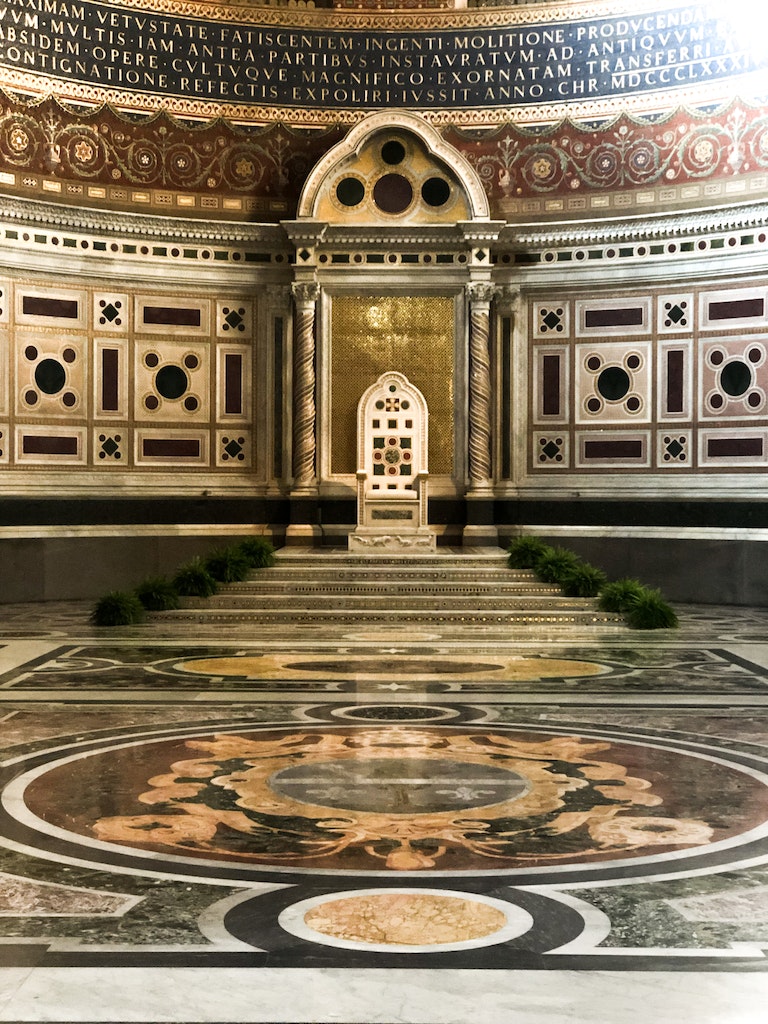 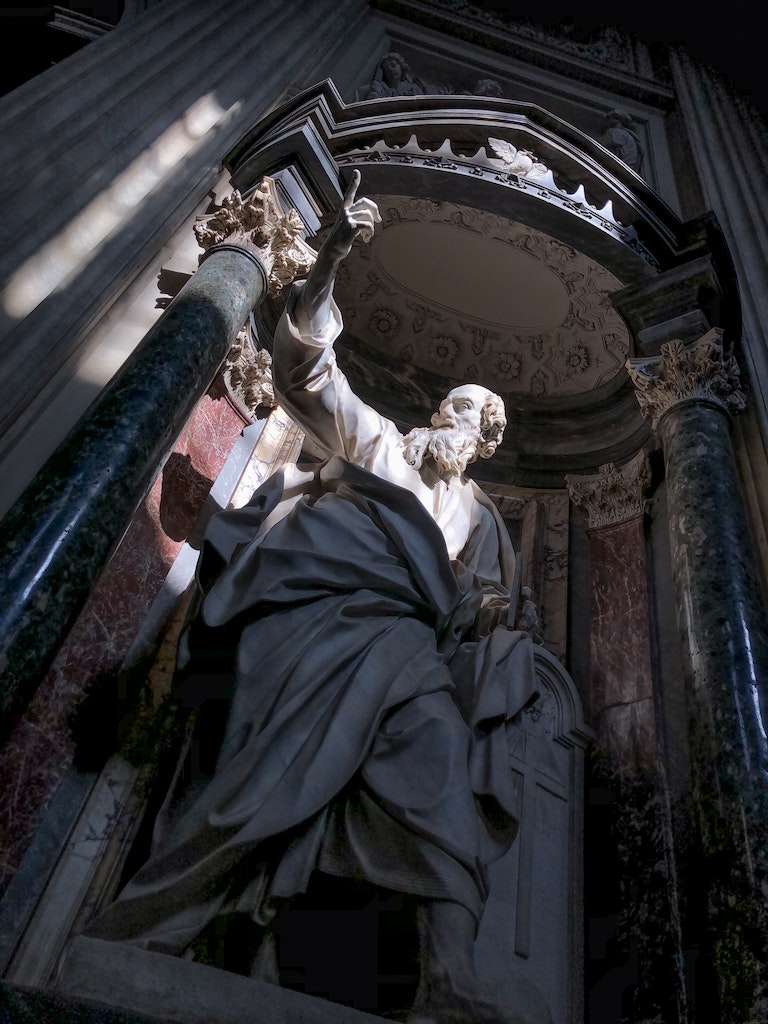 San Giovanni is the oldest public church in Rome and the oldest basilica in the Western church. For over a millennium, it was the seat of the Popes. It is still the seat of the Bishop of Rome—the Pope’s first title. As such, it outranks St Peters.

On an ancient plaque at its entrance, it proclaims itself as the mother church of the world; “Omnium ecclesiarum mater”... Even if that claim applies only to the West church... It’s still an impressive claim.

The façade of San Giovanni is more restrained than many of Rome’s over-Baroqued frontages. Yet, it still retains the dramatic intent of an Italian opera. Strung-out, high-up, is a frozen cast of curvaceously costumed performers. They balance precipitously along a narrow rail which serves as their stage to the world.

But any dramatic intent is cancelled immediately, as the cast of characters play to an empty piazza, crisscrossed as it is, by whizzing traffic, with few breaks.

As soon as there's a break, the traffic surges from another direction. And marooned on the other side is a collection of modernish statues of St Francis of Assisi (Patron of Italy) with his companions. In the thirteenth century, they came to this very church to plead their cause to the Papal court. Francis is caught in a pose that is warning the church that it must reform. Today, it looks more like an exhortation for a break in the traffic, so he and his companions can cross in safety.

Approach from outside the old Roman gates and walls 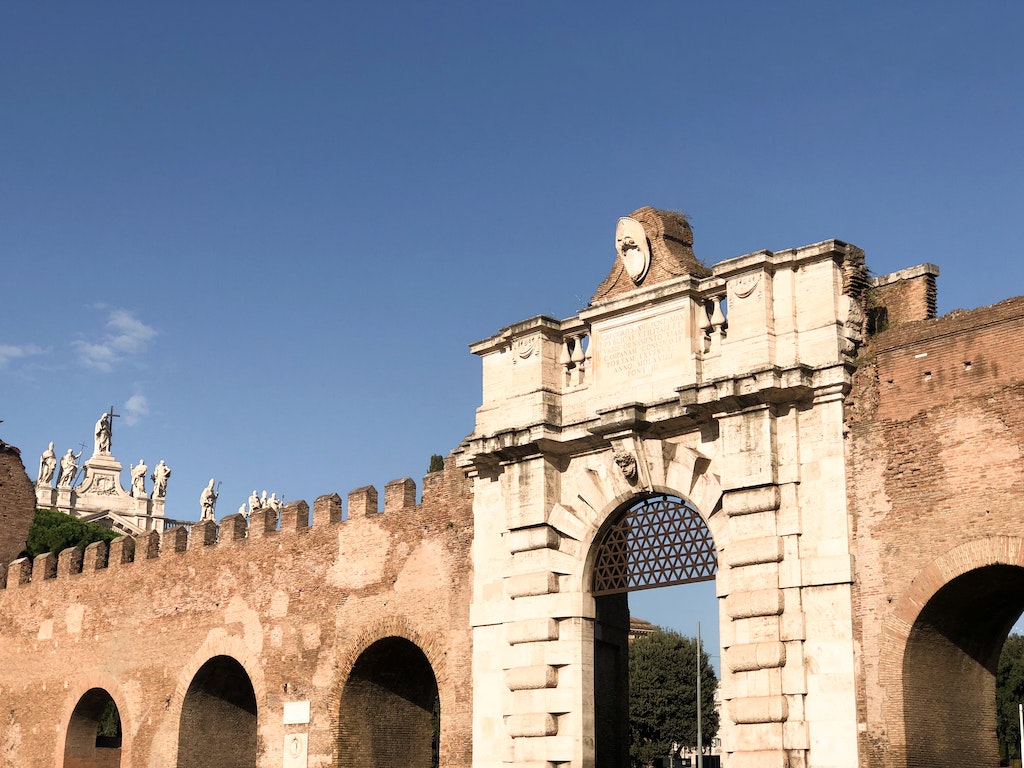 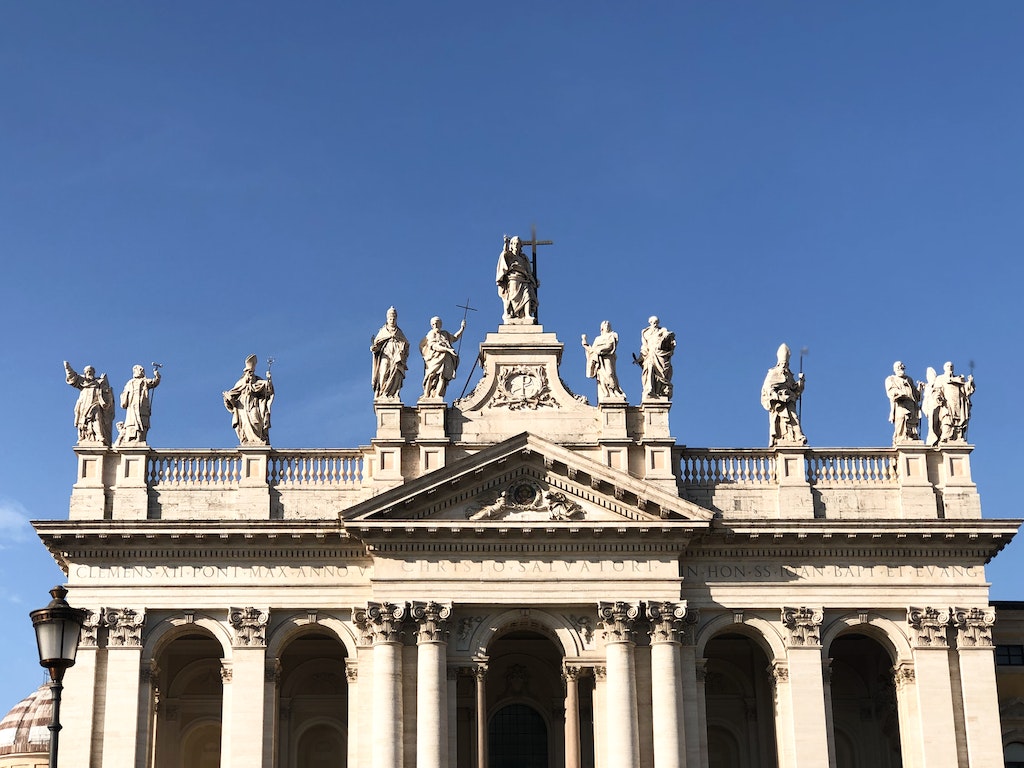 The interior of the Cathedral was renovated by Borromini, one of the great masters of the Roman Baroque. His plan included 12 massive niches down either side. The idea was to house 12 giants; 11 apostles and St Paul. But when they were ready for occupancy, the papacy was preoccupied with decorating the newly completed St Peters. The niches lay empty till the early 18th century.

Eventually, the artist Carlo Maratta (also spelt with an "i") undertook a papal commission to design the 12 huge statues. And between 1705 and 1712, they were progressively completed by a team of Rome’s leading sculptors.

Few will have heard of Carlo Maratta. I only know of him because of several large paintings he undertook at the former Irish Franciscan College of St Isidore’s in Rome, where I have been involved with some projects.

But actually, Maratta was THE leading Roman painter of his day. And, he is all but unknown today.

He certainly is not the first artist who’s reputation has waxed and waned over the vicissitudes of time. Just ask Murillo, who, after a severe trashing, is primed for revival. Then there's Caravaggio, who, following a meteoric late-season rise, could be due for a relegation. And let's not forget Vermeer, as he himself was once forgotten.

If auction prices are a measure of the collective memory for an artist, then poor Maratta, is certainly forgotten. His paintings and drawing are readily available at auction for unbelievably modest prices. They are the sort of prices that would be popular with twee suburban antique shop owners—as they look right, and leave enough for a nice little mark-up.

So while he may be forgotten, back at San Giovanni, his grand designs take centre stage; and will so for centuries, or even millennia, to come. No one will be moving these giants to the back of the shop.

To experience Maratta’s epic colossi as the best natural light passes daily over them, is to experience all the sweep, majesty, and dramatic intent of the late Baroque. It is the full drama; as their makers intended. 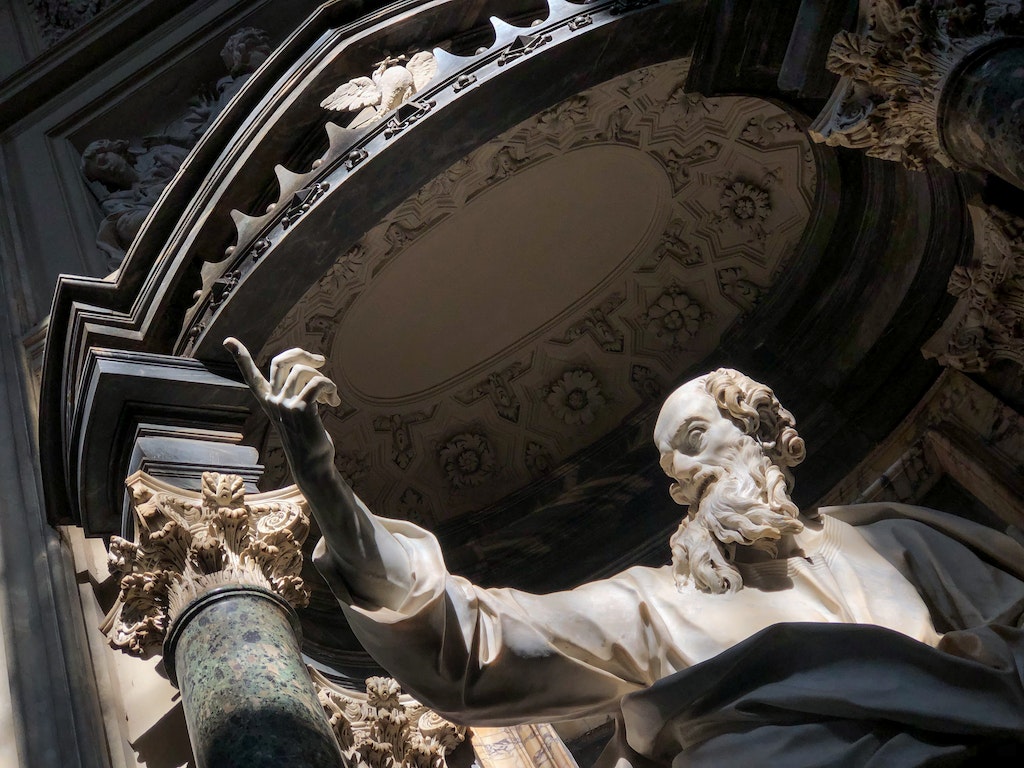 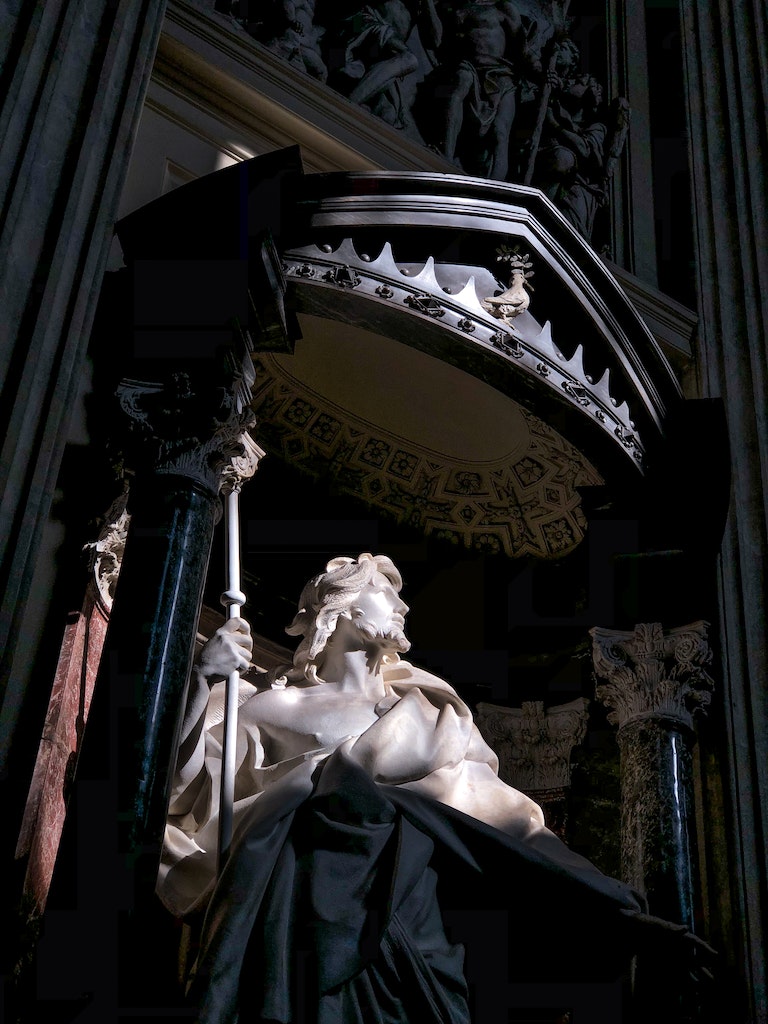 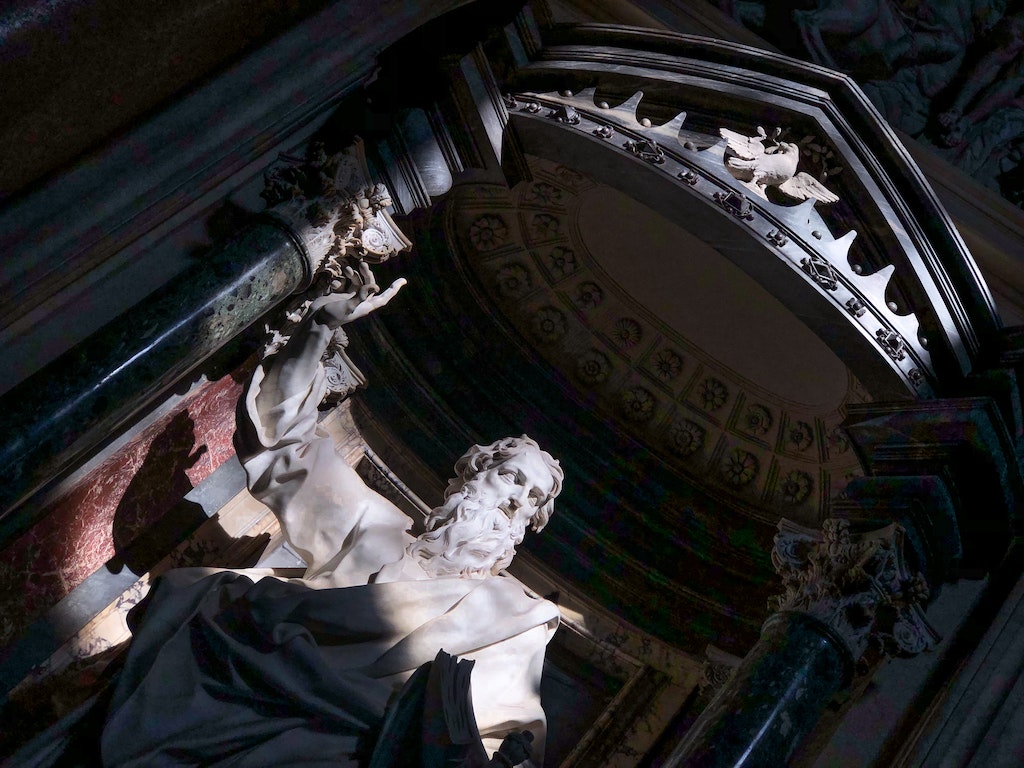 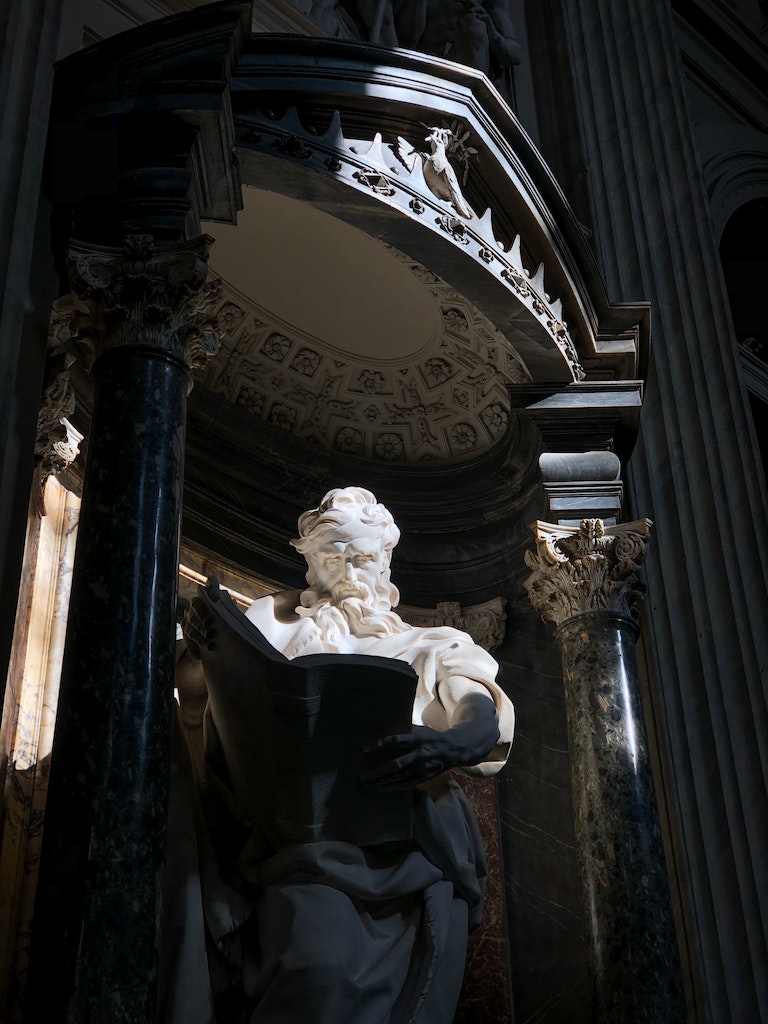 So if the main body of the Cathedral enacts an eighteenth-century theatrical drama, then, between acts, the adjoining late Romanesque cloister offers a 12th-century tray of delicious sweetmeats.

Through a dullened passageway, the cloister opens up as a magically conjured delight of medieval confectionary.

Sinuously twisted and straightened columns of variously rhyming shapes, enclose a simple Edenic garden—one that blissfully silences the traffic of the 21st century beyond... But consider the exotic twists and turns of the fluted columns for a while, and they'll suggest twirls of liquorice, curls of cinnamon sticks and sometimes, melting moments of molasses.

Looking closer again, the gaps of the columns seem to contain a putty of sparking fruit-flavored marzipan. These infills are the beautiful examples of the Cosmateque style of tiling of the early medieval era.

The style is named for the Cosmati family; for four generations, the master tilers of Rome. And the source for their stones? The most dazzling above-ground quarry on earth—the facades and column laying about in the ruins from ancient Rome. The Cosmatis cut tiny triangular and square tiles from the marbles columns, and used them to build up intricate patterns drawn from Byzantine and Arabic influences.

This cloister suggests a medieval love for the exotic and exquisite—even a bit of whimsey. Stay a little longer, and fairytales and myths might appear as true. 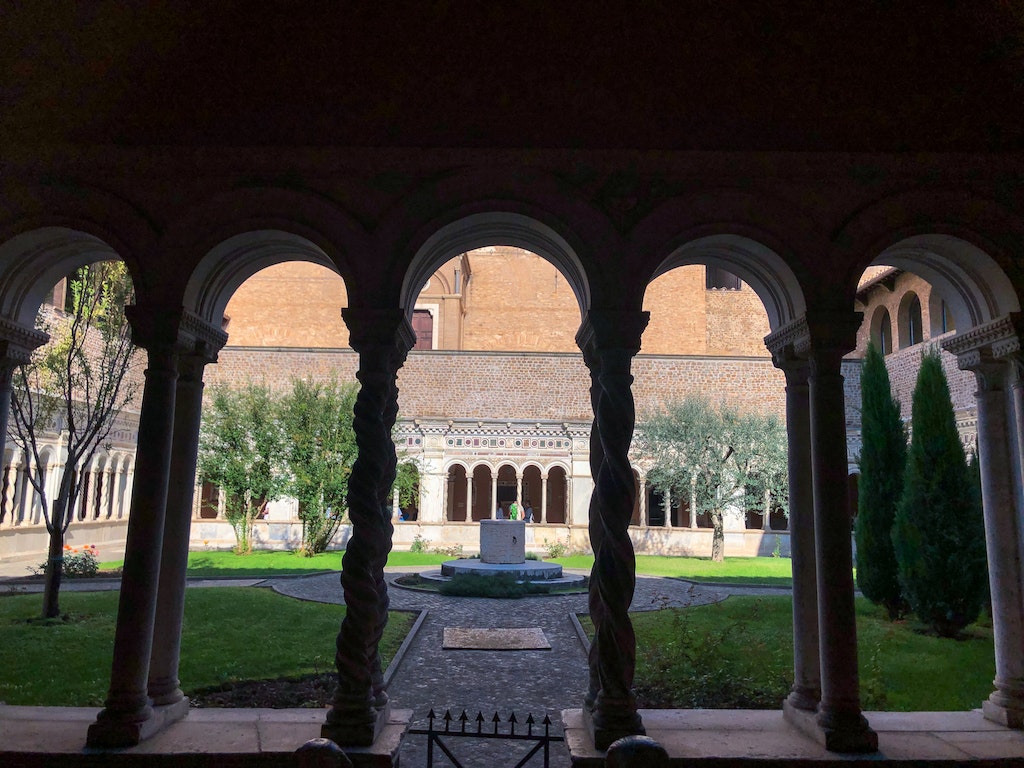 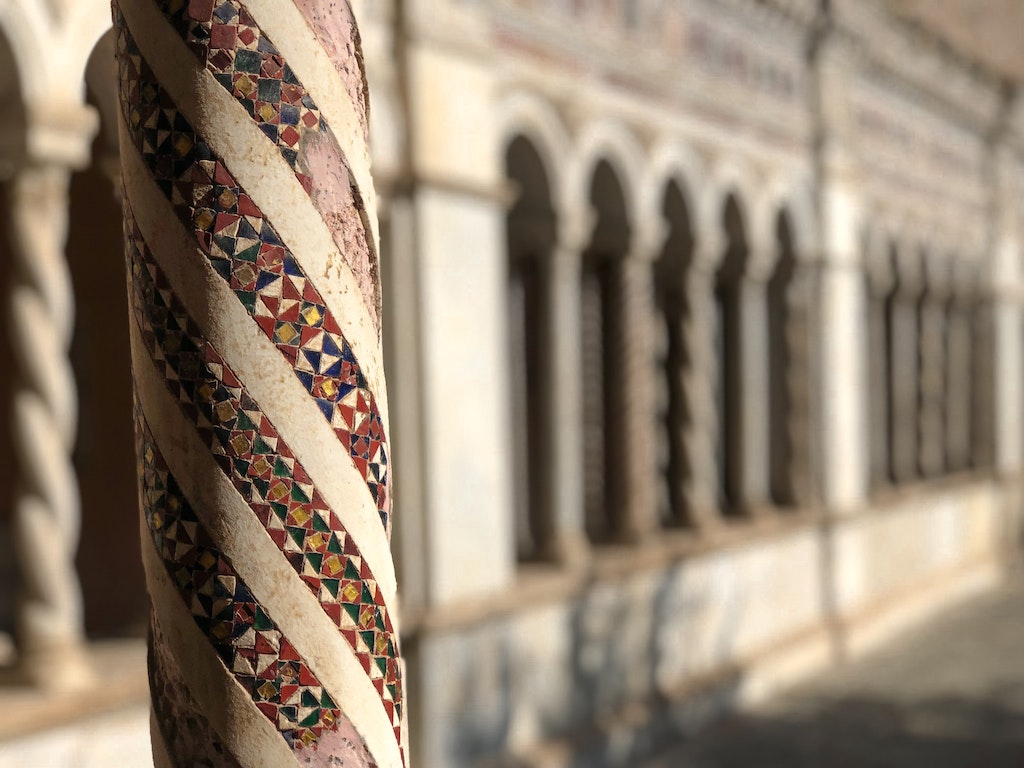 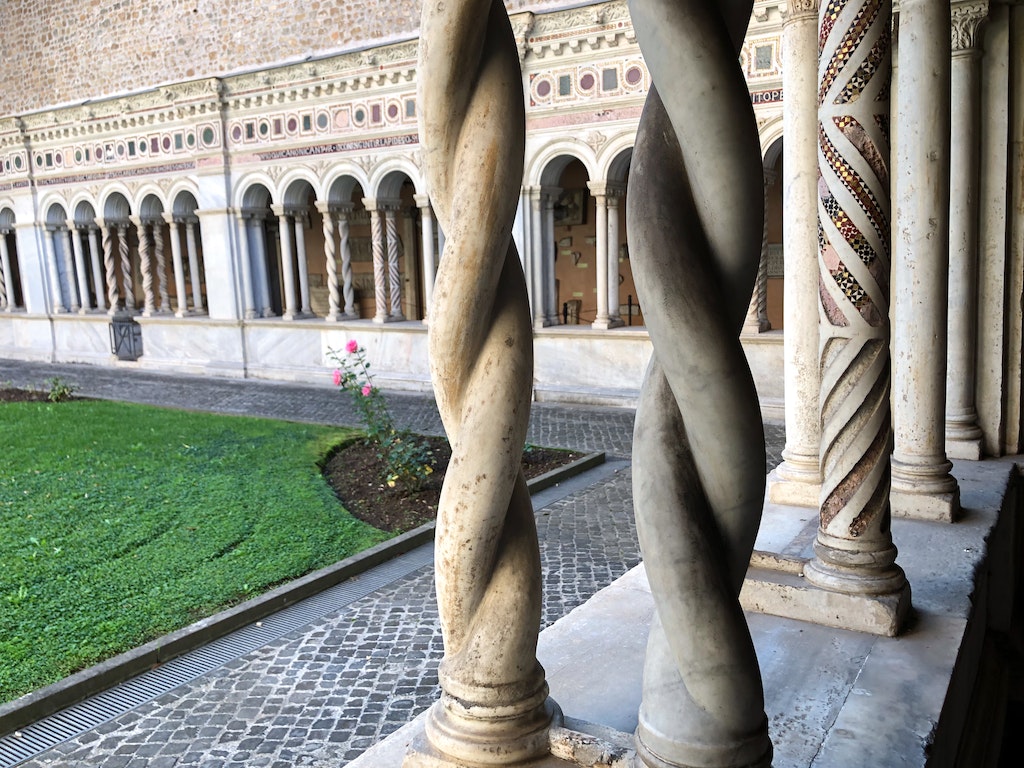 A papal throne from the earliest centuries of the church. Used as part of a papal "taking possession" ceremony. 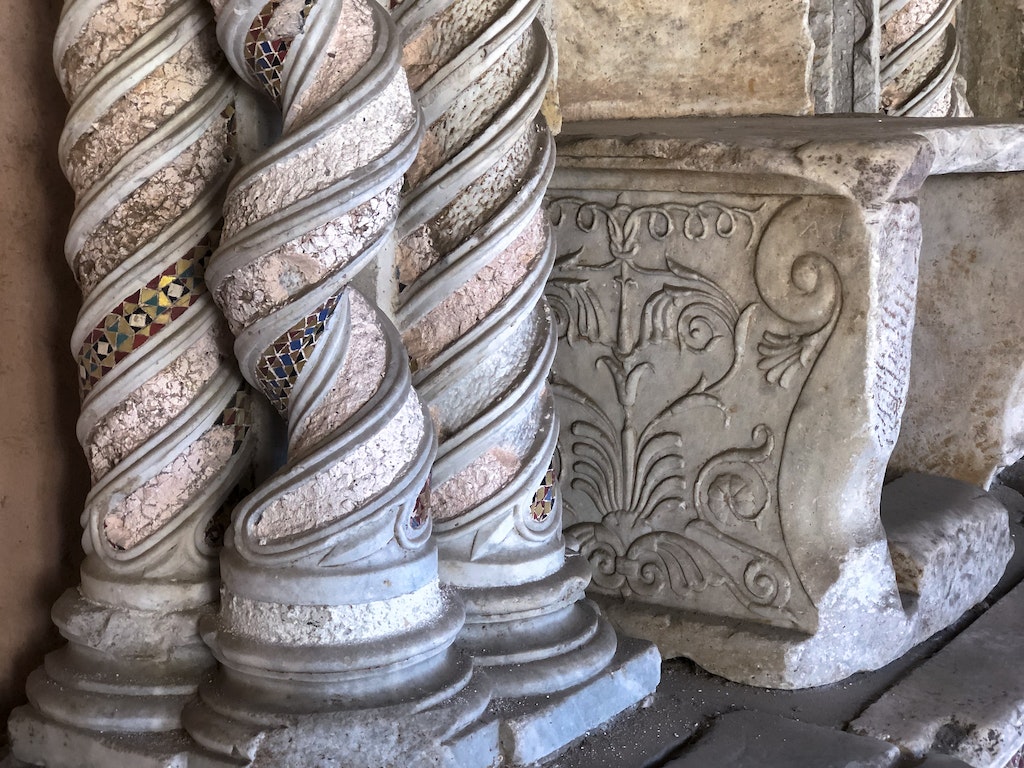