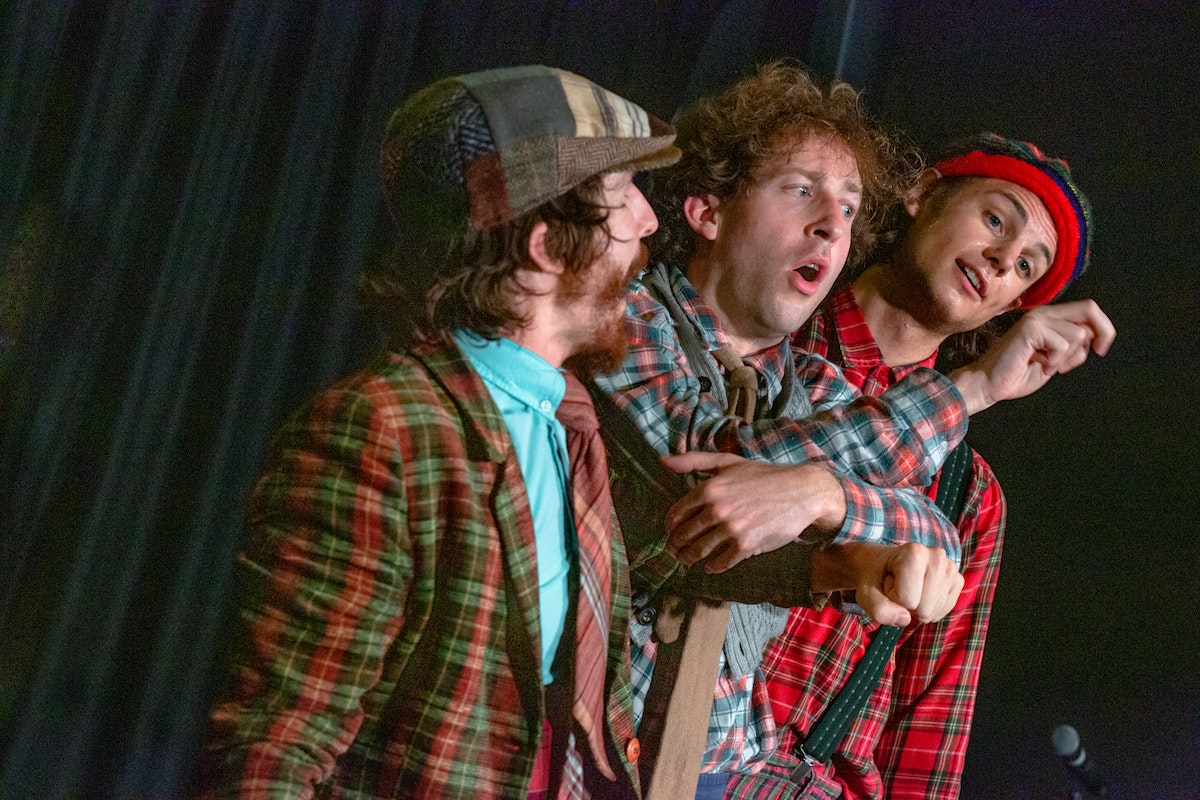 Scotland! is a master work by a trio of young men in their late 20s who believe somehow, they need to reboot their careers anew. They are only beginning. Jonathan Tilley, Sam Dugmore, and Oliver Nilsson are respectively, English, Australian and Swedish. Together they make up The Latebloomers. They met up at clown school in Paris—where they just may have stumbled across the meaning of life.

As individuals, their origins might suggest a predictably lame skit. But for this lot, such an obvious angle doesn't have legs. No; together this trio are masters and maybe pioneers of something way sweeter and far more enduring.

Scotland! is a whimsically absurdist piece of comicality; confected for the sheer delight of their audiences. The troupe do more than just play to their audience. They leap out to drag them back over the drawbridge, to immerse them into the heart of their endearingly absurdist world... It a refreshing and revitalising experience; a tonic to defrag and rejig the most jaded of minds.

So, what’s it about, ...well, nothing... it’s absurd! Ostensibly, the audience is invited to believe it’s a homage to all things Scottish...and it could be... if that's what you want!

And while it’s a touch less reverent than the Edinburgh Tattoo—which is probably a better pick for all thing Scottish—it starts with the same kit of kilts and bagpipes; songs and swagger.

The troupe conjures-up all sorts of convenient Scottish constructs to feed into an ever-evolving mind-gallop into an array of extravagant—often quixotic— adventures and escapades.

As they plop into any number of land and mind-scapes, their canvas is the gloriously wild, foggy and damp of an imagined mythical past—one that is comfortably familiar today.

While there is the definite arc of a storyline, it makes little narrative sense; and it probably isn't meant to.

Its components are the themes and counter-themes of an expertly crafted piece of theatricalised imagination. With a willing audience in tow, the themes gallop out; combining, weaving and colliding with each other as deftly and magnificently as any finely written and performed piece of orchestral music.

Through mime and true clowning skills, the trio steadily prises open the adult minds of their audience—inducing states of child-like merriment. It is a refreshingly luxuriant, joyously whimsical mind-scape; the keys to which adults have long pushed away.

The emotional responses of the audience points to the trio's extraordinary acting skills—the quality of which is concealed behind the primacy of the comedy. But their skills are gloriously to the fore in the periods of pathos that so beautifully counterpoints the forward action. These are pauses of show-stilling tenderness, reflection and ultimately, transcendence. Maybe there is meaning after all.

The Latebloomers have firmly taken the reigns of the great English absurdist tradition and steered it into some particularly sunny uplands. Within the genre, it must be difficult to cast a shadow beyond the monumental shade thrown by Monty Python fifty years ago.

Python definitely played a leading role in highlighting and deflating the sheer silliness that lingered over post-colonial, trying-to-swing Britain. With many of the UK's then absurdities turned into jokes, some fell to dust...

Of course there were other forces in play then. It was a time where the corsets of society were dramatically loosening all around. For many people in the broader English-speaking world, this was a period that ushered all sorts of expanded—often unimagined—freedoms, opportunities and creative possibilities.

But accompanying those massive changes, are new restrictions and different kinds of oppressions. It's easy now, to be flummoxed by the multiplicity of choices; be overwhelmed by the demands of greater personal responsibilities; and be bamboozled by terabytes of digitally generated junk—all lacking any indications of validity or context.

And were we to stop, we would be soon overwhelmed by the absurdity of just standing still. To make sense, we would be begging for a good defrag and rejig of the human hard drive—if only someone could offer a solution.. and its not an algorithm.

So, while this trio may think of themselves as Latebloomers... their contemporary resonance and utility to resolving the multiple bamboozlements of the collective brain, suggests this is indeed, the right season for them to bloom...